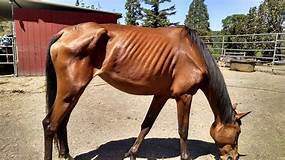 Neglect to the point of suffering is cruelty. Often, the animals have died or have to be euthanized. Why  wasn’t this reported earlier? Surely someone saw the situation before it got to that point. Well, maybe not, but if you see a problem and do nothing, are you also partly responsible for it?

So, what can you do? If you witness an animal cruelty incident, or see a situation where animals are in peril, contact your local police department, or the State Police if they cover the area. You may also call your local Humane Society Police Officer (HSPO). This web site will give you the name of the HSPO and a list of Humane Societies and SPCA’s in your area with locations and phone numbers. http://pda.state.pa.us/BAHDS/HSPO/HSPOSearch.aspx

Your report will be investigated and your identity kept confidential. HSPO’s and police officers are not always knowledgeable about large animals. Some Humane Societies have members on their boards who understand livestock. Horsemen have been called by Humane Officers to substantiate horse cruelty calls. Some complaints are legitimate, some aren’t. An example was a complaint that 4 ponies were in a field “belly up and dying”. They actually were sunning themselves on a warm spring day. However, the complainant was right to report what he thought was a bad situation.

In 2012, the Pennsylvania State Police established an innovative program to assist Troopers in the field with the investigation of animal cruelty incidents. The Animal Cruelty Liaison Program is designed to conduct, and assist with, criminal investigations related to animal cruelty, and the troopers involved get specialized training, not normally offered to the Patrol Trooper. An Animal Cruelty Liaison (ACL) can also assist Humane Society Police Officers as requested. The administrator of the ACL program is Cpl. Michael Spada.

Another resource is the Pennsylvania Academy for Animal Care and Control.  Colleen Shelly, the CEO and Director of Training, is a very knowledgeable horse woman and former State Policewoman.

It’s up to you to let officials know about cruelty incidents. When making a report, provide as much information as possible. The details can go a long way toward assisting an investigating officer. Intentional cruelty is despicable. Unintentional neglect still needs to be rectified.